Slinky in separation anxiety treatment with Misha May - Day One 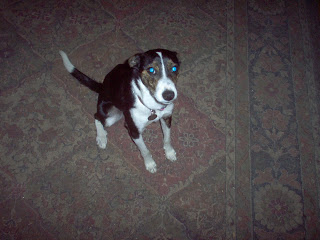 Slinky and I had met previously in a park where we walked and I had given her treats. We liked each other and I knew she felt comfortable with me.

Slinky’s first session began at 6:30pm so we could work for just an evening rather than an entire day. We greeted each other as old friends who were happy to have more time together.

When it was time for her adopters to leave, she and I went into the play yard at the same time that her adopters said, ‘bye-bye’ in a cheery voice as we had planned. She and I continued into the yard where I kept her on leash and we wandered around. It was a good 5 minutes before she realized that they weren’t there. She went to the door from time to time but was not distressed. She was definitely enthralled by the smells in the yard.

This is the first time she would be away from them. Our initial goal as we form Team Slinky is to not leave her alone so that she won't have any more panic attacks. The three of us would be her support while implementing the separation anxiety protocol.

Slinky is a very sweet and likable dog. Fortunately, she is not a Velcro dog. She wanders around with curiosity and does not need to be exactly by your side. Once the separation anxiety is cured, I think she will be a well adjusted dog.

When she realized her adopters were not around, she did become nervous. She sought me out for comfort and came every time I called her name. Interestingly, she would be lying in a very relaxed settle position, but still vocalizing her abandonment.

She was restless and paced for several hours but eventually became quieter and more relaxed. Even though I was with her, she went to the front and back doors, and sought to find the window behind the curtains. She wanted to follow her family.

I did not reward or support her distress by saying things like 'that's okay'. I did help her cope by performing trauma reduction techniques such as Reiki and Tellington Touch. She especially grew very quiet and relaxed when I was doing her ears. I also gave her Rescue Remedy. She was able to gobble treats the entire evening so I felt that she was not that over stressed.

Most of the time she whined and whimpered softly. At those times, I stayed in close proximity but did not give her attention. But, several times she began to vocalize with increasing intensity and volume. I didn’t want to give her attention for that, but I did not want her to continue this pattern or make herself distraught. I decided to say ‘Stop’ in a firm grounding voice to bring her back to the present where everything was okay. She responded by quieting and calming for 20-30 minutes at which time I performed one of the techniques. Often she would offer her belly and I would rub it soothingly.

I decided to not introduce her to any of my dogs in this first session since she was a little on edge. So I carried her in my arms when I let out Shadow, Tara, Twinkle and Valentino from behind their gates. They were all curious and stretching up to smell her. No harsh words were exchanged. I thought the limited exposure went very well. When they came back in I repeated the procedure. Everyone went to their places and all received treats. A very positive experience was had by all.

When I went to let foster dog Teddy out, I placed Corky foster cat in his big crate as usual, to allow Teddy to pass through his area without incident. The difference was that I was carrying Slinky. Slinky and Corky had a short exchange of pure curiosity. Slinky was attracted to the litter box, of course, and I will guard against her access. Teddy was curious about Slinky as well, but was calm and polite as he stretched to smell her in my arms.

I repeated the outings to the yard several times with Slinky. She was settling into trusting me as part of her team. All went well.
Posted by Lorraine May at 7:30 AM No comments:

Slinky in Separation Anxiety Treatment with Misha May Foundation 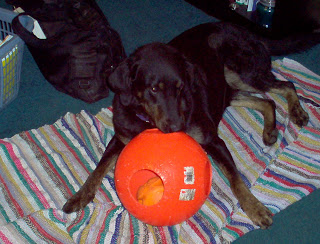 Nothing is more tragic than a dog with separation anxiety. These dogs are not only terrified of being alone, but are certain they will be abandoned. Unfortunately, the ones who find themselves in shelters were correct. These dogs are usually sweet and sensitive and make great pets, except that, when left alone, they can vocalize incessantly, destroy possessions and hurt themselves trying to get to their owner. They cannot be left alone without great risk to themselves and their home.

Separation anxiety has a favorable prognosis if the protocol is followed. This typically needs to be designed by a trainer or behaviorist who has had first hand experience with the condition. Reading a book will not suffice as there are nuances and flavors and layers of complexity with each individual dog and household.

My own experience began with a dog I rescued from a shelter. Rena was already deteriorating in that environment and was soon to be deemed unadoptable. She vocalized so you wished you were deaf, frantically pawed at the kennel door and on everyone, shredded and ate toys feverishly, and refused to come in from the outdoor play area when her turn was over. She was truly a heartbreak. I wasn't certain then that she had separation anxiety, nor did I know the scope of the condition. I just knew I wanted to save her because she was a bright, endearing lab mix suffering unbearably. I assumed that with time, patience, love and some new information, I could help her have a great life.

She certainly came by her anxiety honestly, having been in a shelter in New Mexcio and then transferred to Denver. She had also been adopted once and returned, and although having tested successfully for a law enforcement progam, she was never claimed. She was a statistic waiting to happen. I decided to change her life. And ultimately she really changed mine!

Our stressful all-consuming relationship of the upcoming months could have easily been predicted by the events that occurred within hours of her adoption. When I took her to say good-bye to the staff who knew her, they seemed extremely relieved to see her go. She jumped on them, knocked over the 'poop' waste can (ugh!) and jumped to the top of the toy shelf to grab what she wanted - all on leash!

I had planned toys and treats for our 20 minute ride to work. Little did I know that those most likely saved my life and the lives of many others on the highway that day. Rena wanted to sit on me desperately as I drove, but she surrendered to the delicious rawhides and shreddable stuffy toys that I kept tossing in the back seat. That short ride cost me about $50 in pacifiers!

When I arrived at work, I was going to hand Rena over to my partner while I saw my client. This is when I became educated about pathological bonding. He was unable to manage her as she determinedly screamed and writhed her way back to my office. I will always remember this session with a client who disliked dogs and whom I did not charge.

Rena screamed and writhed her way into our hearts. She became the fourth dog in our home even though I had told my partner that she would be adopted out as Misha May's first rescue dog. It is to these four dogs - Bella, Zeb, Tara, Rena - that I owe my career as a dog trainer and behaviorist. If they had not come into my life, I may not have found my calling. I was ferociously protective of them once they joined my life and so I had to learn to deal with all of their problems. I knew that issues like resource guarding, aggression, escaping, fear and trauma, and separation anxiety could all be considered tickets to euthanasia. I was going to figure out what to do no matter what it required. And I did.

This was the really the basis for The Misha May Foundation. I use what my dogs taught me to help other dogs daily. In 2010, we began to use the slogan Contact us FIRST for training so you won't need us later for rescue. In 2011, we ranked 5th in Denver 7's A*List Best Dog Training!

The following video is of of Slinky left home alone a few days after being adopted. This video helped the owners to diagnose her separation anxiety and to seek behavior modification help with Misha May. Turning the sound down or off makes it easier to watch. Slinky is safe and sound now. She is doing very well in her training:

Posted by Lorraine May at 10:27 AM No comments:

Thanks so much for your application and interest. Unfortunately, although you seem like good pet parents, we do not adopt to homes with invisible fences.

My own beautiful and perfect:) Golden came to me through his invisible fence still wearing the activated collar. Why would he have returned to his yard to be shocked again going in? His owners gave him to me - hurray!

The Misha May Foundation's rescue experience has shown us, to cite a few examples, that dogs escape through the fence if they are adequately motivated, that this punishment-based tool can make dogs anxious, that dogs are sitting ducks (prey) for any other animals (coyote, etc) not wearing collars, and that otherwise nice dogs bite nearby humans when shocked.

We know that sometimes the fences are successful without mishap, but we aren't willing to take the chance. We believe that if someone trains their dog to stay in the yard and they never get shocked, they didn't need the fence in the first place. If the dog gets shocked more than once or twice, this is more like abuse than actually learning anything. There is also a perceived false confidence, sadly proven incorrect, when an extremely interesting animal or person or smell goes by.