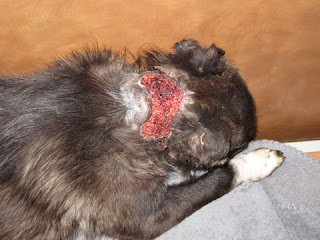 Four month old Baby Justice arrived in Denver today on transport from Gallup, New Mexico to Misha May Foundation Dog Training and Rescue. The photo is from when he was with his New Mexico Angels receiving treatment for his horrible neck wound, and love for his broken spirit.
Justice is the sole survivor of his family group which included mom and 5 siblings. He was dehydrated, starving and injured when he was finally caught. He had been abused by humans and attacked by dogs.
I met the transport and was surprised at how small he and his crate were. So quiet and still. I took him, crate and all, so as not to threaten him with unfamiliar touch.
At my house, I had his apartment ready - a huge Great Dane sized crate. I simply put him, small crate and all, into the large crate. I opened his small crate door to give him access to additional blankets, food, water (with Rescue Remedy) and an elimination area. He is cuddled with his familiar toys given to him by his NM angels.
I covered his crate completely with a sheet to allow him to rest and recuperate. My intention is to allow him to experience my care of him, but to realize I have no expectations of him. I want him to know I can be with him wherever he is in his recovery. It can take as long as it takes.
I visit him often for short periods, letting him know I'll be raising the sheet to sit with him. I don't try to touch him or get him to go outside. I don't try to get him to look at me or respond. I just want him to know that I am there and he can absolutely trust that he is in control of much of his life now - something those with (PTSD) Post Traumatic Stress Disorder need to recover.
He doesn't shake or whimper, but his eyes are wary and alert. He makes eye contact briefly, then looks away, but he doesn't cower in the corner or growl in defense. He is eating and drinking and relieving himself. Yeah! This is a boy finally beginning to believe he is loved and safe. Thank you NM angels!
More story and pictures to come!