Justice: after three months he's almost kissing me - WHAT!?!


I cannot tell you how happy I am to continue telling Justice's story filled with so many successes. It seems that after his regressive week, he has moved forward without hesitation. I am thrilled but not surprised!

Justice has great fun in the kitchen now, acknowledging that it is his safe place. I still believe he is young as he loves tearing apart the boxes and towel rolls I donate to play time. He squeaks all of the toys wholeheartedly too. One day I can home to find the 24 cans from a case of cat food spread around the kitchen as if he had been playing hockey. The box was destroyed. How silly of me to set them on the floor in HIS room. 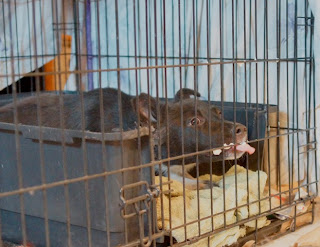 He is also redecorating the kitchen by tearing out the broken floor tiles - thanks, man. Sometimes I can hear him running around and having a great time when I am elsewhere in the house. Often toys and paper and kongs and nylabones are dragged around and left throughout the kitchen. All of this makes me so happy to know he is wildly playing and enjoying himself.

Sometimes he plays so hard that he actually moves his crate around - so funny!


Around the middle of March, Justice began spending more time out of his crate when I was in the kitchen. He even would look at me from the side of his face if I was talking. He seemed to like my singing too.

He became very interested in the dishwasher. He was on hand to smell and lick as I loaded and unloaded. I allowed this since it brought him physically so close to me. I'm making it clear that he doesn't have to trust me but I want him to want to trust me.

Our morning ritual began to strengthen around the end of March. Instead of being fully in his crate when I entered first thing in the morning, he would be peeking slightly around the corner to see me enter. I reinforced his bravery with treats thrown away from him and of course his breakfast. He was tolerating my hand getting closer when setting down bowls. He also began holding longer eye contact without turning away immediately.

He no longer needs to be in between me and the crate so that he can easily run in. He wanders all over the kitchen when I am in there, often sneaking up to smell my shoes or clothing.


He is interested in and seems unafraid of the resident dogs. He touches noses and smells them as they go by or stand near his crate. Medications are delivered in dollops of cream cheese so he gets some too. He stays forward as I smoosh some on his crate. We have photos of him licking it off.

I make it a point to demonstrate the trust the other dogs have in me. I always pet them and talk to them when they are in the kitchen. If they are near his crate, I pet them in a way that my hand is close to him. When he smells them, he also smells me.

Justice has not met dogs out of the crate yet. I want it to be a total non-issue when he does. We are getting close.

Augie, a very friendly 7 month old Golden mix came to visit. They had a great time meeting and greeting through the crate. There are some fun pictures of them hanging out.


Puddy, a young black Lab with a traumatic history, came to board in April. He spent most of his time lying in front of Justice's crate. I thought they must be comparing stories and recoveries. Justice seemed very excited to meet Puddy.

JoJo, a 1.5 year old Golden boy, also brought out the best in Justice. They both offered lots of play bows and mirrored movements.


I have not seen any aggression. This tells me that I have honored his space adequately and proceeded slowly enough for him to feel safe. I witness regularly that he prefers withdrawing to the back of the crate when he is worried, which is an excellent choice.


Justice seems to recognize his name and will sometimes look when called. By the end of March he seemed almost happy and relaxed. He seems to associate me with treats and safety. He is less forthcoming with others yet but makes more eye contact while still remaining in his small crate at the rear of the big crate.

For awhile I was concerned about his eyesight. I think it was stress that made them seem like he couldn't focus. Happily, they seem fine and he looks at me with both of them now.


The hair has not grown back but it seems to be healed. I still have a dilemma regarding a collar and leash though as I don't want to spook him after all of the progress he has made. I have a comfortable cloth collar/leash that I will begin to have nearby to desensitize him to it.


Justice began sitting next to where I was standing. Then one day he was lying down. He also began to take steps toward me while I was watching.

On April 21st, Justice tap danced in the morning when I entered. He was so excited and happy that he simply danced in place. He was expressing his joy and eager anticipation for what the day might hold for him. I can tell you that I have been touched by him very often but this - well, what better thing could happen?

But each day since then has been a day of celebration with more and more milestones. He touches his nose to my pant leg. He comes forward as I slouch down, asking 'how can I help you, sir?' He reaches his nose toward my hand which lies flat along my leg.


And on May 6th he brought his nose close to my mouth almost in a kiss.

I still allow him to make all of the moves and they are coming faster and more courageous now. We have built a very solid foundation. He knows I 'get' him because I don't ask him to do what he cannot.