by Lorraine May, Executive Director
Any part of this blog is not a substitute for a private behavior consultation or training class. Please seek the professional help you need. I do not give advice for dogs or to owners that I have not met. The information contained within is merely a guide for those who feel that this information might be useful, relevant or user-friendly.

Buddy, a 100 pound German Shepherd, came to Misha May from a shelter where he had been returned by 3 different adopters. Besides separation anxiety and a high prey drive, he cleared six foot fences. Poor thing was a mess. Today his separation anxiety is cured, his prey drive is managed, and he hasn't jumped a fence in years. Since the right home never came along, Buddy has settled in as an affectionate uncle / teacher to all of the foster dogs. 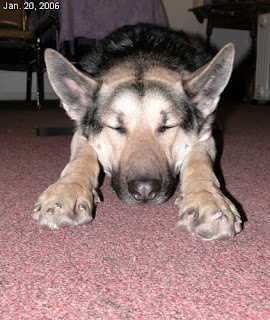 When Buddy first arrived, I assumed incorrectly that if I were with him in the yard he would not be bored or lonely and, therefore, would stay. He did not. He jumped the fence on the second day as I stood right next to him. I am still not sure why, except that he knew he could, and he quite enjoyed the freedom of running around. Eventually he came back to me - I do not know why he chose to, but I was extremely grateful.

I identified my priorities and worked on them simultaneously:
1) to make it impossible for him to jump again - this was a behavior that needed to disappear from his repertoire.
2) to make his time in the yard more fun than his escaping
3) to train him to come to me no matter what

I always went out with Buddy and kept him on a long, long, long leash. I didn't want to tie him out since that wouldn't be much fun and would not encourage him to stay. Tying out is also a way to create an aggressive dog since he can feel so vulnerable and trapped. I did not consider an electric fence, not only because I dislike the idea of shocking the dog, but because if a dog really wants to go through, he will. Misha May has rescued dogs who have escaped such a fence, or who have bitten a nearby person, since the shock can establish a negative association with whomever is near.

With Buddy, I found that I could drop the leash when he wanted to play with the other dogs, but remain close enough to grab it. He only jumped one more time, going after those pesky squirrels. I missed his cues of starting to get overstimulated and then learned the hard way that we still needed to work on his coming to me no matter what. Fortunately, he ended up in the neighbor's yard and felt trapped by our shared 6 foot privacy fence. He was very happy to see me and has not jumped again. I discovered that the words that attract Buddy to my side are, "Are you with me Bud?"

Why did Buddy jump? High prey drive, history of success, it was fun.

Why did he stop? The opportunity was taken away; he received attention and experienced fun in the yard; he learned that coming to me was rewarded.

Do I trust him completely? No, but I give him more freedom after the squirrels have gone to bed.

Flash's owners grew tired of him jumping the fence and then playing keep away. Misha May rescued him from a local shelter when his family decided not to come and get him. Then Flash jumped the fence at his first foster home and again at his adopter's. He found himself back at my
house for more training.

Flash has never jumped the fence at my house. As in Buddy's case, I made a decision to make it impossible for him to do so. Like Buddy, he jumped because he had fun. But unlike Buddy who enjoyed running free, Flash enjoyed the attention of people chasing him. He never went far, just annoyingly out of reach. 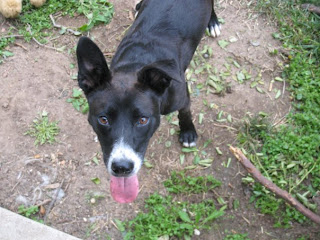 My most important observation of Flash was that he started thinking about jumping when he became anxious and worried, not because he wanted to chase something. He began to whine and pace when he heard unfamiliar sounds. When I attached a leash to his collar, he relaxed and was able to focus and play. The other dogs are of great comfort to him.


Flash, a young border collie mix, is a very adoptable dog. He needs a home where someone will enjoy being in the yard with him and give him attention. Then he can completely relax, feel at home and realize it is more fun to stay in his yard. For awhile, he will need to go out on a long leash. If he never jumps the new fence, then he will lose his connection to that behavior choice. The longer he can go without jumping, the better the prognosis for the future. In a new yard, he will have a clean slate and can be taught to stay at home.

Why did Flash jump? He became anxious in the yard alone and sought attention outside; he created a game of keep away; he was successful in at least 3 locations.

Why did he stop? No opportunity to jump was afforded him; his needs were met in the yard by human and dog friends; he is becoming less anxious in the unfamiliar surroundings.

Do I trust him completely? No, but the future is hopeful since he is so young and sweet, and has responded so well to attention and guidance.

Each individual dog is different, so please adapt this information to yours. Please email any follow-up questions or requests for consultations to Lorraine May, M.A. at mishamayfoundation@gmail.com.