Gabriel Millman of Lakewood, Colorado, passed away at Belcaro Animal Hospital in Denver on Wednesday, September 1, 2010, two months shy of his 16th birthday. For several months he had had canine anorexia, ultimately succumbing to kidney disease. His death was helped by his loving mother, Barbara Millman, Dr. Anna Otero, his veterinarian that day, and vet technician Susan Lillevold. 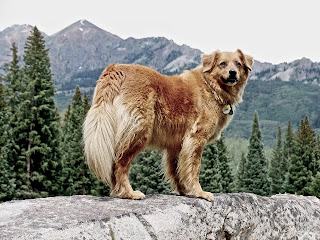 Gabe was adopted by his mother at eight weeks from The Denver Dumb Friends League in January, 1995. At the age of four weeks, he and his many siblings had been dropped off by humans who reported that the puppies' parentage consisted of Golden Retriever, Shetland Sheepdog and Cocker Spaniel breeds.
He had little formal education, dropping out of several obedience classes as well as failing a comprehensive pet therapy course conducted by Colorado State University social workers. Although he advanced quickly in the course and mastered several advanced stress tests designed to prepare him for a potentially chaotic and noisy hospital environment, he refused to sit during the final examination.
From that experience, his mother drew the conclusion that he lacked motivation to work. However, after his feline sisters, siblings Nellie and Amanda, were adopted into the family, he specialized in herding, no doubt due to his Shetland Sheepdog heritage. Occasionally he could be found herding Nellie after she had escaped to the family's backyard, standing over her and barking with pride and triumph at his success.
Gabe drew no distinctions between purebreds and mutts. He enjoyed profusely dogs of all sizes and a diversity of odors, and his spirit thrived in the presence of nearly all humans, indifferent to their race, political persuasion or religion. Gabe himself was a practicing Buddhist, and, in fact, sported a Mutthama Gandhi costume in a pet parade some years back.
Gabe especially enjoyed hiking and camping in Colorado, New Mexico and Montana. Daily he could be found walking the trails, sidewalks and streets of Lakewood and Wheatridge, Colorado neighborhoods.
He is survived and sorely missed by his devoted mother and his sisters. He also leaves behind his uncle, Lawrence Millman, of Cambridge, Massachusetts, a plethora of first cousin Giant Madagascar Hissing Cockroaches, as well as numerous human and canine friends. He was predeceased by grandparents Zelma and Daniel Millman of Kansas City, Missouri.
The family would like to thank the excellent staff at Belcaro Animal Hospital for their care through the years, with special appreciation for his outstanding primary care veterinarian, Dr. Mike Herman, who showed unlimited kindness, dedication and generosity toward Gabe and his mother. In addition, they would like to thank Dr. Matthew Chavkin of the Veterinary Referral Center of Colorado for restoring Gabriel's vision through cataract surgery so he could better enjoy what turned out to be the final, precious months of his life.
Donations were made to The Misha May Foundation in Gabe's Memory by friends Barry & Karla, Linda & Rich, and Judi.
Posted by Lorraine May at 8:45 PM

Labels: Gabriel Millman, in memory, The Misha May Foundation