Separation Anxiety: Day 4 Slinky gets treatment with Misha May

Currently, Slinky is on chlomicalm which is usually the first choice medication for anxiety. It has to be prescribed by a veterinarian and must be accompanied by behavior modification.

Slinky was adopted from a local kill shelter after having been transferred from another kill shelter. We don't know any more of her story. The first day that her adopters left her alone in the house, she destroyed many things. Someone recommended kenneling her, which, of course, is dangerous with SA cases because they often hurt themselves trying to get out and find their owner.

Her adopters followed this unwise advice because they didn't know about her condition. The next day she was crated in a plastic crate but escaped, again destroying many things. When the adopters returned, she was absolutely distraught.

They then purchased a wire crate thinking that she would like the open style. Thank goodness they had set up the video cam that day and captured Slinky’s panic attack complete with destroying the blanket on top. They immediately sought a diagnosis and help for her.

Rena, my first dog with separation anxiety, progressed fairly well as I implemented tactics to help her feel good about being alone. She was my first experience and I definitely didn’t know then what I know now. One of the mistakes I made, was leaving her too long before she was ready. I left her in her wire crate, covered with a blanket, for what I thought would be 3 hours. Unfortunately, I was held up and it resulted in a 5 hour absence instead.

When I returned and stepped into the room, the silence was unnatural. My attention was first drawn to the floor where there had been numerous rugs and floor coverings to catch the dirt and mud from our mountain yard. All I saw was carpeting. As I lifted my gaze, I saw my poor baby cocooned not just within the wire crate and outer blanket, but literally immobilized within all of the floor coverings she had dragged into her crate. It was hilariously tragic, and it took me awhile to free her from her twisted prison. She seemed fine and miraculously continued to like her crate even after that.

You probably want to know how I initially created such a strong positive association between Rena and her crate when she refused to even enter one then. Motivation is always the answer. Because she loved stuffy toys, I started by throwing her favorite one into the crate as we were playing and she was on the move. She followed it right in, picked it up and came towards the gate. I let her come out, but as she did I took the toy. I continued playing the fun game of throw the toy in the crate and taking it when she exited. She astutely realized that the only time she could lie down and play with her toy was in her crate. That did it! Eventually I was able to close the door.

For some dogs, crate training is successful with meals or special treats, friendly smelling bedding or just time and patience. The key is to go as slowly as needed, always having it accessible and filled with something irresistible to your dog.

Slinky waits at the door beautifully now while I attend to other animals. Her time increased today because I included feeding the cats and scooping their litter boxes.

Slinky decided she liked the durable dinsoaur nylabone she found and and chewed happily for quite some time. Like many dogs, Slinky appreciates items that wear the slobber, saliva and smell of other dogs.

Slinky is integrating seamlessly with the resident dogs. They are all roaming, playing and resting during the day. Here she is with, playmate Shadow. 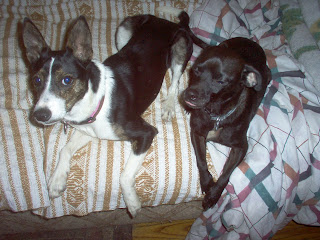 Another milestone in her treatment was her calm response to my moving the car out of the garage with her in the house. This can be an enormous trigger for dogs who have separation anxiety as it predicts departure. I was not actually leaving so I came right back in. I found her hanging out with Shadow, pictured below. I moved the car because based on her behavior, I was 99.99% certain that she would not react. In treatment, our goal is to change predictors of abandonment into irrelevant happenings.

Her mom came and picked her up in what would be their first visit since treatment began. It is important to widen Slinky’s circle of trust while maintaining the bond with her adopters. We want the transition between and among them to be stress-free. Gina was given a list of things that I had already introduced that she would now practice today and in future visits.

1) All greetings and farewells are low key
2) Ignore half of her approaches.
a) Reward all distance. If Slinky is sitting away from you, say softly ‘good girl’. If she comes to you, nonchalantly acknowledge her with a quiet good girl. We don’t want to discourage the ‘come’.
b) Try to walk by her when she is lying down somewhere. Pet her calmly - keep going half of the time, join her half of the time.
3) Imagine a line across an inner doorway. When she is behind it and you are on the opposite side, say ‘wait’ as you throw a small treat just past her, being sure she can see it. As she turns to get it, say ‘yes’. As she nears the imaginary line coming toward you, say ‘okay’ before she crosses so that you are actually giving permission to cross. This builds a ‘wait’ cue along with independence and confidence, while giving her a job to do in your absence.

Buddy, a 100 pound German Shepherd rescued by Misha May, suffered with separation anxiety. He had been returned to a shelter three times for destroying homes. The notes claimed that he had even pulled a refrigerator across a kitchen to get to the loaf of bread on top – had he been tied to it? In looking for his perfect adopter, we needed someone who would be sensitive to his need for a transition between his foster home and his forever home. He is doing terrific at home all day now, but we began with hours, overnights, and weekends. His adopter even went home each day for lunch to make her absences shorter.

When Slinky first returned from her play date with her mom, she greeted me and the dogs with joy and ran into the yard to play. Then as the distractions lessened, she realized mom was gone. She whined and searched restlessly for about an hour, much less than the first evening. Again, I wanted to help her but not reward the anxious behavior. Rescue Remedy came to the rescue again. She lay down in one of the crates and relaxed. Here she is crying softly.
http://youtu.be/bTRSLsW5Tcc

I am very happy to report that she soon discovered another toy which kept her busy and soothed.
http://www.youtube.com/watch?v=qwa3KwuQy9U
Posted by Lorraine May at 1:25 PM