This was the day to ‘fall back’ the clocks. Of course the dogs don’t notice that – until meal times. For us humans, it is only 4:00 but for them it is already 5:00. I actually never change my clocks so that I operate between the two time designations. It does sometimes shock people when they glance at the clock and realize they are late! I also continue to ‘save an hour’ and that makes me really happy each time I check a clock.

I was registered to attend the CPR and First Aid for Canines class designed and instructed by Westminster firefighter Eric Roth between 9am and noon at Doggie Pause Dog Daycare in Englewood. I was asked by Jennifer Brauns of Mile High Dog magazine to write a story for the December issue about the class to encourage pet parents and professionals to become educated in CPR and other techniques that could help stabilize their dog until veterinary care became available. The next class will be held at the same location on Sunday, January 29th from 9am – noon. To register (cost is $50 half of which is donated to Misha May Foundation) go to http://www.mishamayfoundation.org/ and use the make a donation button.

Slinky was having a good time and enjoying the attention from friendly people as we helped set up and the class began. She was supposed to be the only dog and my plan was to allow her to roam so that when her mom came and left she would be distracted and not feel anxious. However, another dog Sunshine attended and so Slinky was limited in her wanderings so that the class would not be disturbed.

As an interesting side note, Slinky has only gone to the bathroom once on a leash. Many dogs who have not had that experience don’t realize that it would be okay, even preferable if they are away from home for hours. Slinky did not go to the bathroom until she returned back to my yard.

Slinky’s mom Gina attended a portion of the class in order to work with Slinky. I wanted to help Slinky see that her mom could show up anywhere and thus break down her belief that when her mom is gone she will return in a certain way to a certain place at a certain time. The harder it is for Slinky to track the patterns, the less likely she will hold onto cues that trigger her anxiety.

While Gina was there she moved around the room from time to time away from Slinky. Slinky watched her but stayed relaxed. When Gina was in her seat nearby Slinky, Slinky would even leave and explore and solicit attention from others. Slinky is a very social dog who knows how to get what she wants most of the time.

After Gina left, however, Slinky whined quite a bit for the rest of the class. I was surprised by that behavior. It helped me realize that distraction is not enough. There needs to be distraction that moves Slinky away. She feels better if she is the one leaving, not the one left. So as not to give attention to her whining, but also to avoid disturbing class, several of us took turns taking Slinky outside in the play yard and administering anxiety reducing options such as Rescue Remedy, massage, ear massage and Tellington Touch. I must say that the results were not as good as I would have liked. Fortunately she did not have a panic attack or become intense but there was continuing whining. Not even her dinosaur chew or bully stick held her attention for long.

She was okay with not having mom around, but the act of her leaving triggered her anxious response. It makes me think that something bad happened to her when the person she trusted left her. Was it when they dropped her at the shelter and she became frightened? Did the person she trusted most leave her with someone who was cruel to her, or just alone and unable to get what she needed? Was she taken away from her mom before 8 weeks and perhaps has never felt secure?

We won’t ever know the answer but tracking her responses carefully, helps me design the next steps for her treatment. If she had been panicked, for example, I would have left and ridden her around until she calmed down. But her level of anxiety seemed mild enough to allow her to experience that she was safe and surrounded by loving people. It was not a setback as she didn’t have any lingering negative effects.

When class ended and we were cleaning up, she seemed to have recovered fully. She was distracted by Sunshine and the activity. She was calm and quiet then and for the ride to my house. She had no trouble the rest of the evening and settled into her routine with the other dogs. I was satisfied that she had had a stretching experience that supported her safety and security in her world.

Here are two photos of Sunshine and Slinky: 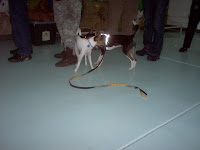 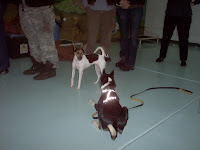 Interestingly enough, the last time the class was offered, I had Kabul with me. He also had separation anxiety and was in treatment with Misha May. He loved the class and was featured in many videos as the model dog. Here is a link to one of them:

http://www.youtube.com/watch?v=L6ncu3UZess
Posted by Lorraine May at 10:13 PM