Separation Anxiety: Day 8 of Slinky with Misha May Foundation

I’ve been changing the order in which I perform cues which signify my departure such as picking up the keys, donning my coat, or moving the car from the garage. Slinky is taking note but not reacting. I have especially found it useful with cases of separation anxiety to move the car around from garage to driveway to street and around the block on separate days, returning after each move. Since I return quickly, the dog gets used to my departures and returns.

Joan Ogner, Professional Organizer and owner of Very Organized, was here today helping me sort through years of stored Misha May ‘stuff’. My home is no longer the ‘shelter’. I am dedicating my time to teaching dog training and behavior to owners, fosters and apprentices in Misha May’s Community Education program. Misha May will continue to rescue as many animals as we can find foster homes for, including a maximum of 3 at my home! Joan is a fantastic coach, a hard worker and she really listens to what you want. Contact Joan to get organized:)
Email: veryorganized@mindspring.com (303) 618-1723 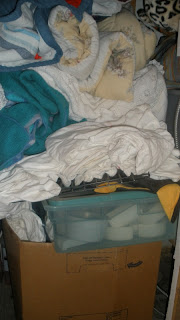 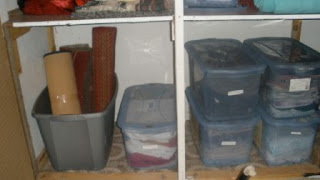 Slinky spent the day assisting us and being off on her own. She was very independent exploring the basement and first floor, and checking in with us. She seemed to be very relaxed knowing we were there but not attentive to her. This is an important step for a separation anxiety dog. She understood that just because we were not directly engaged with her, it didn’t mean we were not available to her. You can understand how this understanding can expand to include those times when the person is not physically present either.

Some dogs with separation anxiety salivate so much that they are in a pool when the owner returns. Slinky doesn’t have that symptom, but Samson did. Samson, a 5 year old neutered male Aussie Shepherd mix, is a foster with The Misha May Foundation and needs an adoptive home. When he was returned to us after having been adopted for three years, he exhibited quite a bit of fear and anxiety.

His foster reported to us that besides vocalizing and being distressed when they left him alone, he also was urinating. However, upon closer inspection, they realized it was saliva filling his crate, not urine! Samson did not have severe separation anxiety and was fairly easily convinced that his crate would bring great things and that his kind foster would indeed return. He is currently crate trained and much more relaxed.

I simply directed his foster to practice separating from him when home, and to reward him for calm behaviors. This home had no children or other dogs and was quite quiet. This was exactly what he needed to relax and not develop more phobias. Often, when dogs are sensitive to one trigger, like being left alone, they will develop additional phobias. It is crucial to afford them sanctuary to unwind and heal.

Slinky and I visited a friend and her dog this evening. Canyon is an adult spayed female setter who is very friendly, well adjusted and playful. Slinky and Canyon became almost immediate best friends. They soon were in rhythm with their play bows, alerts to birds and squirrels, and attention-seeking from the humans. They were two absolutely joyful dogs, which I can’t show you since I forgot my video camera.

I took two bully chew sticks along even though Slinky had shown no interest previously. Suddenly when she witnessed Canyon’s intense chewing, Slinky decided to see what all of the excitement was about. Soon, the 2 girls were lying side by side enjoying their treats. Dogs learn from watching each other.
Posted by Lorraine May at 2:45 PM